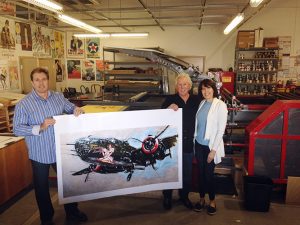 Newly established printmaking company Rue Royale Fine Art is looking to make available to publishers, artists, and galleries the services of their original lithograph printing studio. The company is operating a very rare antique Marinoni Voirin press made in France, and a large-format Dufa flatbed lithograph press made in Ger-many. Originally powered by steam and later converted to electricity, the Marinoni Voirin press is the same type of machine used in the 19th and early 20th century ateliers of Paris to produce original works of lithographic multiple fine art by such masters as Alphonse Mucha and Henri Toulouse-Lautrec.

Rue Royale is located in Las Vegas in a 13,000-square-foot facility, where master printer Daniel Lee-land Woodward brings over 20 years’ experience in the production of limited edition fine art lithographs and was mentored by French chromist Jean-Pierre Rémond. The company was established in late 2013 by Bill Barber and his son William. Bill Barber’s professional experience is diverse: from casualty insurance to casino operations and funding, to slot machine distribution in Europe. He has owned Merchants Billing Services Inc. for the past 15 years, and his most recent investment is Rue Royale Fine Art LLC.

A rare Marinoni Voirin stone lithograph printing press owned by Rue Royale Fine Art and pictured in the print-maker’s Las Vegas studio. Made in Paris, the press is over 100 years old.

Rue Royale Fine Art has appointed Scottsdale Art Group, owned by Tom Doyle, as the exclusive distributor of the inventory. Mr. Doyle says, “I am reaching out to galleries that were customers of S2 and re-establishing that wholesale relationship.” At the same time, he is introducing artists and publishers to Rue Royale Fine Art who are interested in producing handmade litho-graphs. Among them is Michael Bryan whose “Lucky Lady,” featuring a WWII bomber, has just been released as a limited edition hand-made lithograph. Speaking from his studio in Laguna Beach, CA, Mr. Bryan says, “After looking at the market and where it has gone over the last 10 to 15 years, I think it has become image driven. In other words, people buy, not because of the handcrafted value of the print but be-cause they like the image.” So Mr. Bryan, who used to print his own serigraphs in the ’80s and ’90s, says, “I decided to see if we can resurrect people’s values and tastes. If you are the artist working on the print you know how to make it. It is its own art form, its own life, its own piece of art.” The original “Lucky Lady” is a mixed media on aluminum measuring 120 by 96 inches.

His paintings are in the collections of museums in California, Texas, Kentucky, Georgia, Florida, and Germany. 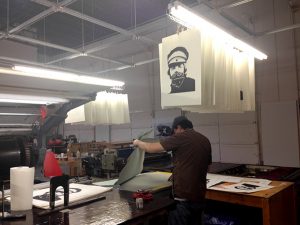 Daniel Leeland Woodward works on a hand-pulled lithograph by Ringo Starr entitled “Bandana Man” and shown above in the photograph.

Scottsdale Art Group has also introduced Neal Glaser, representative of Ringo Starr’s artwork, to Rue Royale Fine Art to create hand-pulled lithographs of the work of the English drummer, singer, songwriter, actor, and also artist who gained fame with the Beat-les. Two of his pieces have just been printed, “Bandana Man” and “Wooden Man.” Ringo Starr sells his artwork when he goes on tour and the proceeds go to charitable causes that he supports. Says Tom Doyle, “Neal flew into Las Vegas, did a tour of Rue Royale, and gave us two images to print. And we are hoping to continue doing business. We thought it was a great feather in our cap printing for Ringo.”

In a video on the Rue Royale Fine Art website (www.rueroyalefineart.com ) Daniel Leeland Woodward, lithographer, and chromist, as well as master printer, describes this old craft style of printing from the turn of the previous century as “a beautiful process.” The litho-graphs on French paper are made in one to 20 colors, with an average of 12 to 16 colors, printed one color at a time, and each sheet is hand-fed.

The inventory acquired by Rue Royale Fine Art and exclusively distributed by Scottsdale Art Group consists of original lithographs recreated by S2 of work by Mucha, Al Hirschfeld, Toulouse-Lautrec, Rafal Olbinski, Tom Everhart, Matt Rinard, Stanley Mouse, and Waldemar Swierzy. Also included in the inventory are two collections: The Ré Collection of posters inspired by the Posters Golden Age (1885-1939) and the AFI (Art of the Movies) Collection where names and faces of Hollywood legends Charlie Chaplin, Bette Davis, Bela Lugosi, Rita Hayworth, and more made a grand comeback as Art of the Movies. In association with the American Film Institute, these iconic images were re-created honoring the 100 selections in AFl’s 100 Years, 100 American Movie Posters Classics. The approximate retail price range for the prints and posters is $150 to about $5,000. “We can give a gallery a great value,” says Mr. Doyle.