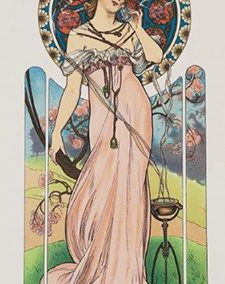 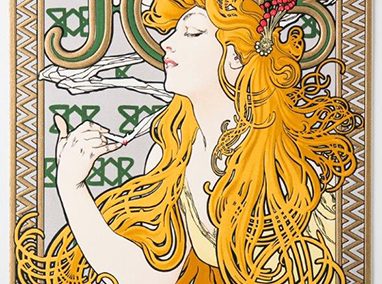 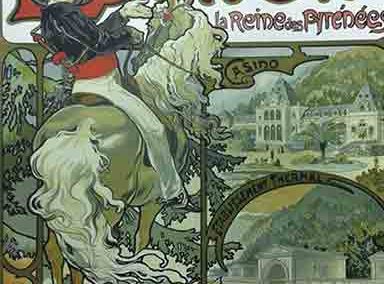 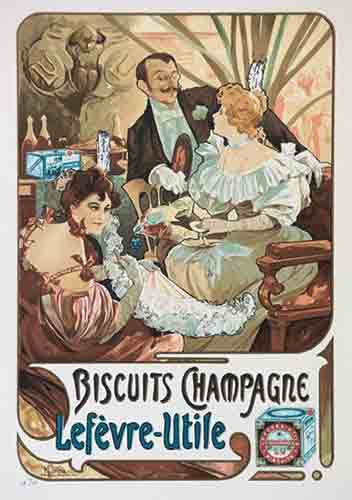 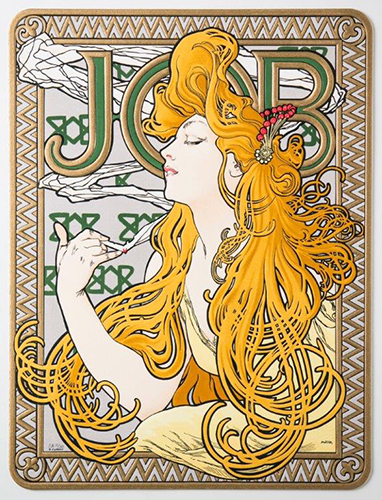 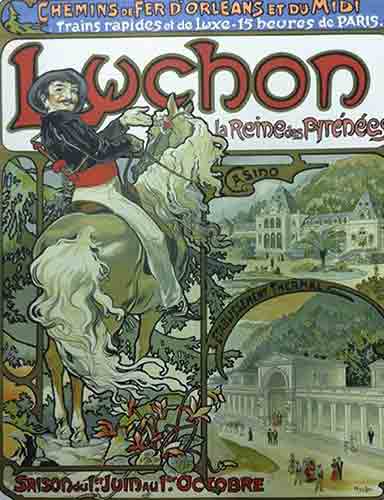 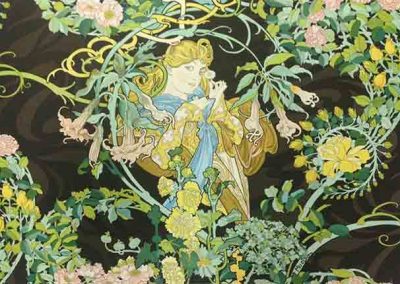 Alphonse Mucha is for many people synonymous with Art Nouveau. Mucha’s works frequently featured beautiful healthy young women in flowing vaguely Neoclassical looking robes, often surrounded by lush flowers which sometimes formed haloes behind the women’s heads. In contrast with contemporary poster makers he used paler pastel colors. His Art Nouveau style was often imitated, however, this was a style that Mucha attempted to distance himself from throughout his life. He insisted always that, rather than adhering to any fashionable stylistic form, his paintings came purely from within and were influenced by Czech art. Mucha’s way was based on a strong composition, sensuous curves derived from nature, refined decorative elements and natural colors. The Art Nouveau precepts were used, too, but never at the expense of his vision. Despite distancing himself from the movement, Mucha collaborated with other Art Nouveau artists at the time, notably designing the complete Art Nouveau interior for Georges Fouquet’s Paris jewelry shop interior in 1901.

Alphonse Maria Mucha was born in the town of Ivanèice, Moravia (today a region of the Czech Republic). He worked at decorative painting jobs in Moravia, mostly painting theatrical scenery, then in 1879 moved to Vienna to work for a leading Viennese theatrical design company, while informally furthering his artistic education. When a fire destroyed his employer’s business in 1881 he returned to Moravia, doing freelance decorative and portrait painting. Count Karl Khuen of Mikulov hired Mucha to decorate Hrušovany Emmahof Castle with murals, and was impressed enough that he agreed to sponsor Mucha’s formal training at the Munich Academy of Fine Arts.

Mucha moved to Paris in 1887, and continued his studies at Académie Julian and Académie Colarossi while also producing magazine and advertising illustrations. In the winter of 1895 Mucha volunteered to produce a lithographed poster for the play Gismonda by Victorien Sardou staring Sarah Bernhardt. The resulting work was an overnight sensation and announced the new artistic style and its creator to the citizens of Paris. The pleased actress awarded him a five-year contract that produced such posters as Lorenzaccio (1896), La Samaritaine (1897), Médée (1898), Hamlet (1899), L’Aiglon (1900) and perhaps the most famous of his works, La Dame aux Camélias (1896). Along with the poster designs Mucha produced Sarah’s stage and costume designs. A year later Mucha published his first decorative panneaux, The Seasons. In France, where the poster played a considerable commercial role, such talent that produced the Gismonda poster was not likely to escape the notice of publicity-minded industrialists. Mucha received numerous commercial commissions as well – for posters, calendars, lithographs, and various other kinds of advertising material. He did not limit himself to graphic art, however, but also designed jewelry, textiles, bronze work, and furniture. His versatility as a designer may be seen in Documents Décoratifs (1902) and Figures Décoratives (1905), publications which provided models for his many followers. Printed on December 20, 1899, Le Pater was Mucha’s occult examination of the themes of The Lord’s Prayer and only 510 copies were produced. Mucha considered Le Pater his printed masterpiece, and referred to it in the January 5, 1900 issue of The Sun Newspaper (New York) as the thing he had “put [his] soul into”.

The 1900 Universal Exhibition in Paris spread the “Mucha style” internationally, of which Mucha said “I think [the Exposition Universelle] made some contribution toward bringing aesthetic values into arts and crafts.” He decorated the Bosnia and Herzegovina Pavilion and collaborated in the Austrian Pavilion at the Exposition. After living in America for a brief time the Mucha’s returned to Prague. Alphonse continued his work, notably providing the decorative elements for the Theater of Fine Arts, and creating the murals in the Mayor’s Office at the Municipal House, and other landmarks of the city. When Czechoslovakia won its independence after World War I, Mucha designed the new postage stamps, banknotes, and other government documents for the new state.

The Mucha window in Prague’s St. Vitus Cathedral was designed in the early 1930s. He spent many years working on what he considered his fine art masterpiece, The Slav Epic, a series of twenty huge paintings depicting the history of the Czech and the Slavic peoples in general, bestowed to the city of Prague in 1928. He had dreamt of completing a series such as this, a celebration of Slavic history, since he was young. Beginning in 1963 the series has been on display in the chateau at Moravský Krumlov.

The rising tide of fascism in the late 1930s led to Mucha’s works, as well as his Slavic nationalism, being denounced in the press as ‘reactionary’. When German troops marched into Czechoslovakia in the spring of 1939, Mucha was among the first people to be arrested by the Gestapo. During the course of the interrogation the aging artist fell ill with pneumonia. Though eventually released, he never recovered from the strain of this event, or seeing his home invaded and overcome. He died in Prague on July 14, 1939 of a lung infection, and was interred there in the Vyšehrad cemetery.

The Mucha Museum in Prague is dedicated to the life and work of the world-acclaimed Czech Art Nouveau artist and is run by the artist’s grandson, John Mucha. The museum, housed in the Baroque Kaunický Palace, offers a selection of paintings, photographs, charcoal drawings, pastels, and lithographs by Mucha as well as personal memorabilia and is located in the very heart of Prague.